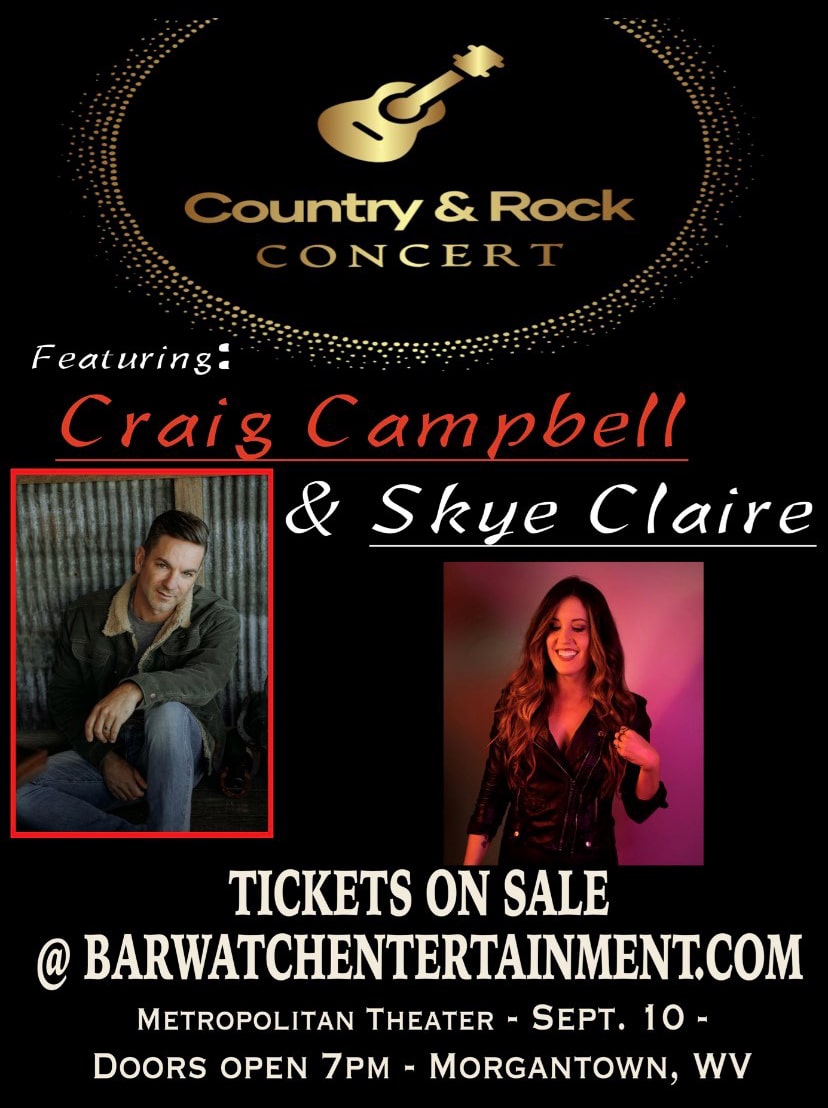 Join us for Country Night at The Metropolitan Theatre as Bar Watch Entertainment presents Craig Campbell with Skye Claire on September 10 at 8 p.m.

Craig Campbell has never taken a backseat to anything. He’s certainly never taken a backseat in his career as one of Country’s brightest rising stars who launched onto the Country music scene in 2011 and continues to exist in a perfect sweet spot between tradition and modernity. That doesn’t mean the road to five consecutive charted hits and over a half million downloads has always been easy. There have been bumps along the way for the Georgia-born artist, on his path from the small town of Lyons to Nashville’s Music Row. But through hits like “Keep Them Kisses Comin’,” “Fish” and “Family Man,” and countless shows, he’s kept his eyes on his mission – to bring his fans true country music with a spin all his own, through timeless songs that tell his life story. And with his forthcoming debut project on RED BOW Records – flag-shipped by the earnest “Outskirts of Heaven,” which was co-written by Campbell – he is ready to share the next chapter: where that timelessness meets the here and now.

“There are a lot of sides to me that people haven’t yet seen,” he says, currently at work on his third and most versatile record. “You can expect some great music with a little more energy, and a lot more fire.” He’ll certainly show these other sides on his forthcoming LP, which signals a whole new era for Campbell – new label, new songwriters, new producer (Mickey Jack Cones, known for his many successes with Dustin Lynch, Joe Nichols and more) and a new outlook that lets him explore all the facets of his unique niche in the Country landscape. And the timing is perfect. While the genre shoots off in directions left and right, Campbell’s a singer capable of melding both the old and the new into something purely special, purely his own. The lead single, “Outskirts of Heaven,” showcases Campbell’s vocal chops layered with an element of “undeniable excitement” (Music Row Magazine). There’s also palpable energy in the tracks, from “Hangin'” which fuses a honky-tonk spirit with a full-throttle, hard-rock energy, to slinky vibes of “Upstairs” that’s edgier – and naughtier – than anything he’s done previously. The guitars are bigger, the sound rounder, the vision more complete. It’s Campbell like he’s never been heard before, but it’s actually the truest to himself yet. Campbell kept pushing even through the difficult times, back when his original record label folded. “It was very deflating,” he admits, but he kept persevering. His sophomore LP, Never Regret, earned him comparisons to Alan Jackson, Travis Tritt and Clint Black, and “Keep Them Kisses Comin’” climbed into the Top Ten of Country radio. It wasn’t long after the shuttering of his former label Bigger Picture that his current home, BBR Music Group’s RED BOW, snatched him up nearly instantly. RED BOW recognized that it was crucial to keep that classic-country-bred, smooth-as-molasses voice singing. The innately gifted songwriter additionally signed to BBR Music Group’s Magic Mustang Music for publishing.

Growing up in a strong Southern Baptist home, Campbell fell in love early with the sounds of Country radio, and built a foundation not just as a singer and performer, but as a songwriter. It was a conversation with Luke Bryan, for whom he once played keyboard, that really helped him set his priorities clear. “He said, ‘man you need to be writing songs, and you need to be writing with different people, twice a day,'” recalls Campbell. “That’s where you can define yourself as an artist, with people writing songs that tell your story. And nobody is going to sing them better than you.'” That dedication to the craft made him not only understand the importance of crafting songs like the fan-favorite “Tomorrow Tonight” with trusted collaborators, but also to keep writing, constantly. It’s an ethos that recently led to Garth Brooks himself cutting his track “All American Kid” for Man Against the Machine. “That was such a huge, huge honor,” said Campbell. “I didn’t believe it was happening, even when he was recording it.” And now, the release of “Outskirts of Heaven,” serves as the blueprint for his road ahead, full of songs that tug at heartstrings, push boundaries and seep in with infectious melodies. “All the songs we are writing are all very committed and current,” he says. “But it’s still me, singing. That’s the main thing I want people to say, at the end of the day: that I’m a great singer, who truly loves country music.”